Scale matters  to meet the challenge: we’re set-up to lead the fourth agricultural revolution in Europe towards the tipping point in favour of regenerative farming.

Our vision is the development of large scale regenerative agriculture in Europe, starting in the UK: farms which capture carbon, build soil vitality, create healthy food and provide a vibrant economic engine for the renewal of our countryside.

Our mission is to acquire farms and transform them into a vibrant network that is environmentally, socially and economically regenerative. We do this by working with the ability of natural systems to regenerate themselves.

We work through a best-in-class approach which is proven internationally.

It is called holistic management and it is already restoring land in every ecological and economic context – from organic sugar cane in tropical Brazil, to ranches on the prairies of North America.

As we acquire and then transform farms, we will build the capacity of a new generation of farmers to flourish and once again be able to afford their businesses in new models of ownership, and be able to pass them on to future generations.

New Foundation Farms: we’re building a new foundation for all our futures in partnership with nature.

While, typically, people think of farming as being about growing what we eat, it’s also about the fibres that we wear. Almost every fibre that forms the foundation of our clothing comes either from soil or oil (soil = cotton, wool, linen, silk etc.; oil = nylon, acrylic, polyester, spandex etc.).

Our mission is therefore about both food and fibre:

“To make agriculture part of the climate solution by catalysing the scaled transformation of farming to grow affordable, nutrient-dense food and high-quality fibre on regenerating soils.”

Is Carbon negative including for livestock operations

Regenerative farming methods applied in beef finishing systems have been demonstrated to capture more carbon than they emit. The peer reviewed assessment of this possibility benchmarks the net carbon sequestration at 3.59 tonnes of Carbon per hectare per year for Midwestern USA.

Regenerative soils outperform the soils of any other approach including organic measured in terms of conventional baseline soil KPIs. Organic carbon, organic nitrogen and water-holding capacity always move together.

Conventional soil tests evaluate only the chemical and physical properties of the soil, and they use caustic, reactive acids (nitric and sulfuric acid) which do not mimic the interaction of nutrients and root systems. The nutrient cycle is a biological phenomenon, not a chemical one.

One of the soil test regimes that takes this into account is the Haney Soil Test. It biomimics those acids actually emitted by plant roots (oxalic, malic and citric acid) and it uses water as the extract on the basis that it rains water.

Biodiversity not only creates resilience but is also a driver of soil, plant and animal productivity. 1g of healthy soil can contain one billion microbes and an acre of healthy soil can contain one billion invertebrates (including insects and earthworms). Seeding cover crops in multi-species combinations of a 7, 8 or more (cocktails) can deliver 3x times more output than mono-culture. Below ground, the hyphae of the mycorrhizal fungi connect to multiple plants and arbitrate the nutritional and energy needs of both micro-organisms and plants.

Reduces pest instances by a factor of 10x

A healthy population of beneficial insects (pollinators and predators) on farmland requires biodiversity and no insecticides.

If a farm suffers an infestation of pests, it is because there is a lack of predatory insects. For every pest species, there are 400 to 1,700 species beneficial to human health without which food webs and ecosystems would collapse.

Regenerative farms have 10x fewer pests than conventional farms and beneficial insects can recover quickly after the adoption of regenerative practices, even within one year.

Healthy soils dramatically reduce the impact of both floods and drought. 1g soil can hold up to 9g of water. A 1% increase in soil organic matter stores an extra 65,000 – 95,000 litres of water per acre. Soil holds on to water via a capillary film around each soil particle: the more soil particles, the greater the water holding capacity. Improving soil structure through no-till, mycorrhizal fungi and soil biology increases water infiltration and storage. This is known as “effective rainfall”, i.e. the soil’s ability to infiltrate and store water which in turn mitigates the variation in rainfall.

Nutrient density increases with regenerative farming. The soil’s ability to support nutrient dense, high vitality crops, pastures, fruit and vegetables requires the presence of a diverse array of soil microbes from a range of functional groups. The majority of microbes involved in nutrient acquisition are plant dependent. That is, they respond to specific carbon compounds exuded by the roots of actively growing green plants.

What is true for agroecological approaches in general, is especially true for regenerative agriculture: They drive economic prosperity. Agroecological practices generate Value Added/Gross Value of Production (VA/GVP) ratios that exceed those from comparable conventional and industrial practices, i.e. they focus on value, not scale. The focus on profit per acre instead of yield per acre makes for much more profitable business and consequentially more biologically diverse approach top farming. Agroecology carries considerable economic potential; sustaining employment levels and increasing incomes. This can be further amplified by the construction of closely-knit webs for local processing and marketing.

Increased farm profitability. Soil organic matter is a more important driver of farm profitability than yields. Ecological resilience = economic anti-fragility. Regenerative farming is more anti-fragile and at minimum twice as profitable. One driver of this is significantly lower input costs – 20% lower on a like-for-like basis.

Regenerative agriculture is not one single method. Rather, it is a way of understanding the farm as ecosystem in a biological niche. There is no “one-size-fits-all” recipe. In the world of biology, form follows function.

The case studies collected here demonstrate the many ways in which the “biological systems” perspective has generated agricultural enterprises that outperform both the “nature conservation” and “industrial agriculture” paradigms – at the same time.

This case study is an abridged version of the article found on the Ellen MacArthur Foundation website.

Now, his business is thriving. Native produces 75,000 tonnes of organic sugar annually – 34% of the world market and a figure Balbo is planning to increase in line with demand – and 55,000m3 of organic ethanol each year from a crop of approximately 1.2 million tonnes of cane. His sugar is sold on five continents and used in over 100 high profile products. The Balbo Group produces 100% of the energy it needs to process around 6 million tonnes of sugarcane per year in thermoelectric power plants running on sugarcane bagasse (the pulpy residue left after the juice of the sugarcane has been extracted).

Beyond that, thanks to its investment in cutting-edge technology, Balbo has generated enough extra power to supply a city of 476,000 inhabitants. Indicators of sustainability have been defined with leading universities and research centres to assess the health of the soil on the farm, including its fertility and levels of water, air, and biodiversity, and they provide clear evidence that the agricultural activity is regenerative. Some measurements are less precise, but no less important: the farm has a level of biodiversity that’s over 50% of that found in Sao Paulo’s national parks, proving for Balbo that a thriving ecosystem and crop monoculture can coexist.

For the Balbo Group innovation is a continual process. Aiming to find a solution which can be widely used in agriculture, it has recently launched a project to construct a prototype of a 100% autonomous weed control robot. Balbo explains that: “This can avoid the use of pesticides not just in organic agriculture. The benefit for humankind and the planet could be enormous”. To disseminate ERA practices and technologies, a technology-transfer company, Agros Fortis, has been created, enabling farmers to pay to apply ERA practices and technologies to their land. According to Balbo: “I feel it is my duty to disclose this expertise, and I hope it will help apply our findings to other fields, other crops. I hope Native will be seen as an example of what can be achieved for the future, as living proof that anything is possible.”

“At Native [the Balbo Group’s agricultural brand], our production system now achieves 20% higher productivity than conventional sugarcane production, with genuine concern for environmental, social, and economic factors. It is the first time that an organic, large-scale initiative has produced a higher yield than conventional agriculture!” 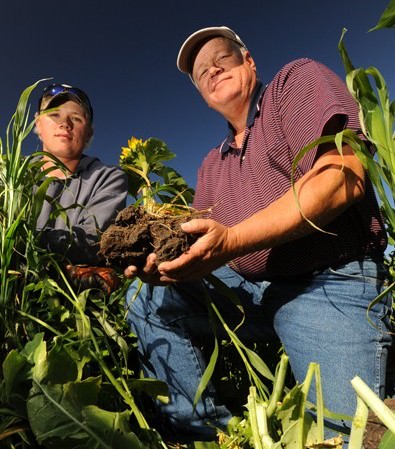 Gabe Brown is a farmer, entrepreneur, author and public speaker. He farms near Bismarck in state of North Dakota, USA, not far from the Canadian border.

All of his work is based on his complete engagement with regenerative farming principles since 1991 when he first bought the farm which he summarises as follows: “I follow five principles that were developed by nature, over eons of time. They are the same any place in the world where the sun shines and plants grow.”

Between 1995 and 1998, Brown experienced a period on his farm which he refers to as the “disaster years”. ‘Today, I tell people that those four years of crop failure were hell to go through, but they turned out to be the best thing that could have happened to us, because they forces us to think outside the box, to not be afraid of failure, and to work with nature instead of against it’.